The religious beliefs and expressions the Spanish conquistadors saw in Peru and could only make sense of as a deviation from Christianity were described by them recurring to a variety of familiar terms and concepts.

Buildings dedicated to religious purposes were often called mosques, “mezquitas”, an obvious and yet interesting choice when one remembers that it was the time that the Spaniards had lived with Muslims for many centuries and that only recently, especially during the Re-conquest, those had became expressly ‘demonised’. 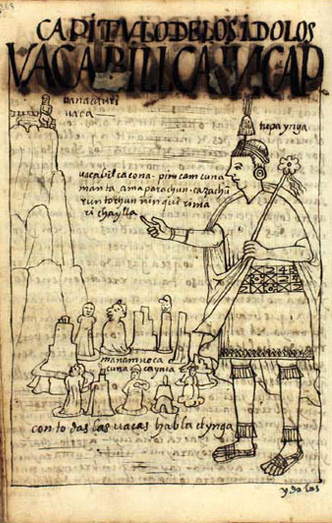 It is therefore no surprise that the deities the Spaniards understood to have been worshipped were called ‘idols’, ‘a statue which is venerated for its likeness to a false god’ (Cobarruvias [1611] 1977 Tesoro, p. 727, trans. SDS), as a Spanish dictionary defines the term. However, a certain confusion was evident when the ministers of the alien practices were referred to as ‘bishops’ (Francisco de Xeres and Miguel de Estete in: Markham [1872] 1970 Reports on the Discovery, p. 32 and 76 resp.).

Thus, we can see that the initial years of the Spaniards’ experience in Peru showed a certain confusion as how to interpret this alien religion (but, of course, we must take into account that the men who wrote this were warriors, often from a simple background, and not clerics).

On the other hand, an Amerindian term was adopted in Spanish to talk about ‘pagan’ practices. The Quechua word for ‘worship, offer’, mucha-, included both the European concepts of ‘offer’ and ‘pray’ (ritual and discourse), whereas in Spanish these two acts were linguistically differentiated into ‘ofrendar’, ‘make an offering’, ‘pray’, and ‘adorar’, ‘adore, worship’. For some reason, the Quechua word mucha– became hispanised and whenever the Spaniards referred to indigenous worship, the word ‘mochar’ was being used and even ‘mochaderos’ for the ‘places or objects of worship’. (See Dedenbach-Salazar Sáenz 2013 Muchay.)