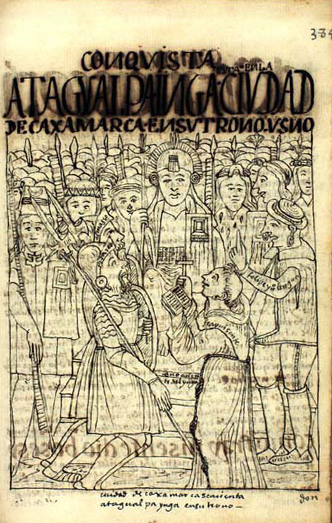 Briefly after having met the Inca in Cajamarca, Northern Peru, the Spanish invaders took Atahualpa, the Inca king, prisoner, and their accompanying priest, Valverde, showed Atahualpa a Christian book which the Inca – instead of giving it the expected admiration and reverence – through away saying the following, according to the witness Francisco de Xeres:

… the Governor asked the Father Friar Vicente if he wished to go and speak to Atabaliba, with an interpreter? He replied that he did wish it, and he advanced, with a cross in one hand and the Bible in the other, and going amongst the troops up to the place where Atabaliba was, thus addressed him: “I am a Priest of God, and I teach Christians the things of God, and in like manner I come to teach you. What I teach is that which God says to us in this Book. Therefore, on the part of God and of the Christians, I beseech you to be their friend, for such is God’s will, and it will be for your good. Go and speak to the Governor, who waits for you.”

Atabaliba asked for the Book, that he might look at it, and the Priest gave it to him closed. Atabaliba did not know how to open it, and the Priest was extending his arm to do so, when Atabaliba, in great anger, gave him a blowon the arm, not wishing that it should be opened. Then he opened it himself, and, without any astonishment at the letters and paper, as had been shown by other Indians, he threw it away from him five or six paces, and, to the words which the monk had spoken to him through the interpreter, he answered with much scorn, saying: “I know well how you have behaved on the road, how you have treated my Chiefs, and taken the cloth from my storehouses.” The Monk replied: “The Christians have not done this, but some Indians took the cloth without the knowledge of the Governor, and he ordered it to be restored.” Atabaliba said : “I will not leave this place until they bring it all to me.” The Monk returned with this reply to the Governor. Atabaliba stood up on the top of the litter, addressing his troops and ordering them to be prepared. The Monk told the Governor what had passed between him and Atabaliba, and that he had thrown the Scriptures to the ground.

This episode was told by several early authors who were also conquistadors. It is interesting to observe that the story varies in details: it tends to be ‘a book’, but sometimes it is explicitly said that it is the Bible (which is rather improbable considering that the Church did not promote the circulation of the Holy Book); sometimes the interpreter is mentioned explicitly. We cannot exclude the possibility that it was copied and repeated from the first account, and I would even suggest, possibly invented for the Spanish emperor in the first place in order to underline the necessity to civilise and christianise the indigenous peoples, which, of course, necessitated the conquest and pacification of them.

The behaviour established the Andean peoples’ ignorance, but it could, of course, also serve to show their unwillingness to become better men, and it documented the monumental difference between the ‘barbarians’ who did not have writing and the civilised Christians who did, and which was especially manifest in them having the written word of God. However, in the recounting of the episode by Xeres it becomes also evident that the Inca thought that the Spaniards were thieves, and, what turned out to be an important reason of the quick victory of the Europeans, that (supposedly) some indigenous people had behaved badly against the Incas themselves, and, as Pizarro hurriedly affirms, the Spaniards had to restore order. In a way the brief episode reflects the situation and the discourses of the conquest quite exactly although the narrator could certainly not have written it with this in mind.

The Spaniards who came to Peru were used to the fact of many different languages being spoken as they had experienced this problem before, in the Caribbean and in Mexico. It was therefore necessary to use the help of interpreters. (Also see Ríos Castaño 2005 Fictionalising interpreters.)

We can imagine that often the communication passed through persons who knew several languages so that a message would finally ‘arrive’ after a number of, literally, interpretations. The Inca language, for example, had been widespread by this expansionist state and we can imagine persons speaking it as a second or third language and who might have helped the Spaniards via an ‘interpreter’ (in the true sense of the word) who for his part came with them, spoke his own native tongue, had picked up some Spanish and through his travels or second-hand knowledge knew some Quechua. Thus we have to imagine the early contact situations.