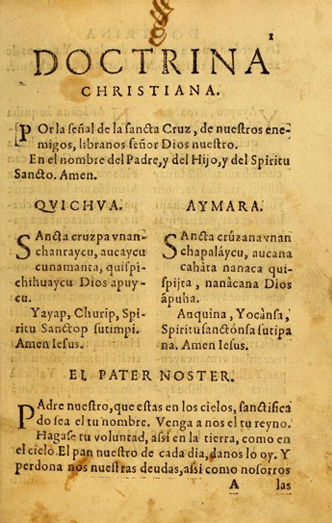 The Christian Doctrine: ‘The Sign of the Cross’ in Spanish, Quechua and Aymara (Doctrina Christiana 1584, fol. 1r);  from the copy of the John Carter Brown Library, Providence, Rhode Island, USA.

The first steps to christianise the indigenous population was baptising them, for which they had to be familiarised with the basic tenets of Christian faith. It was recognised early on that this would best be done in their own, native languages, or at least the ones which were widely spoken, the so-called general languages, such as Náhuatl in Aztec Mexico or Quechua and Aymara in the Andes.

In Peru the Third Lima Council, which met in Lima in 1583 under the direction of the Jesuit scholar José de Acosta, decided to translate, with the help of mestizos who knew both languages, the catechism and a collection of sermons in to the Amerindian languages Quechua and Aymara (Doctrina Christiana 1584; Tercero Cathecismo 1585).

This manual could and should then be used by the missionaries in their catechisation work. Although they were supposed to know the indigenous languages, this was not always the case and when they did, such a handbook would be of great help, especially as it was considered the new norm. It was apparently necessary to unify the texts because variants seemed to have circulated and thereby confused important concepts. The new texts made a great effort to create a solid vocabulary and adopted several techniques for the creation of a Christian Quechua (and Aymara) lexicon. Few Spanish words were loaned into Quechua, such as ‘soul’. In Spanish it was ‘alma’ and ‘ánima’ and the word chosen for the Quechua language was anima. The first lexicographer, the Dominican Domingo de Santo Tomás, had used, among other words he constructed on the basis of existing Quechua terms, ‘heart’, sunqu (Dedenbach 1979 Sonqo). In Quechua this implied more than the organ itself, but also emotive character traits and even seems to have referred to a concept not dissimilar to our ‘soul’. It is possible that it was not adopted by the Lima Council in order to avoid constructing an equivalence between both religions. Other Amerindian words, however, were integrated into the Christian prayers. For example, Apu, a powerful mountain spirit in the Andes and as apu title and address for an important person, was now used when speaking to the Christian God. The Virgin Mary was also called quya, the denomination of the Inca queen. We can only suspect the indigenous reactions to these translations: confusion and maybe an integration of the Christian elements into the Andean belief?(See Dedenbach-Salazar Sáenz 1997Terminología cristiana; Dedenbach-Salazar Sáenz & Elke Ruhnau in preparation, 2013 Salvando las almas.)