The Lima Council also created and translated sermons which presented the most important aspects of Christian belief, such as the sacraments and the Commandments (Tercero Cathecismo 1585). The socio-cultural situation was also addressed, as seen in the illustration: “Sermon 19, in which the witches, their superstition and useless rites are rebuked. And it deals with the difference which exists between the adoration of the pictures of saints by the Christians and the adoration of idols and guacas [indigenous deities] by the unfaithful” (transl. SDS). The Andean people were seen as the victims of the Devil and his work, reflected in that they obeyed this demon’s servants, who were their own indigenous priests. 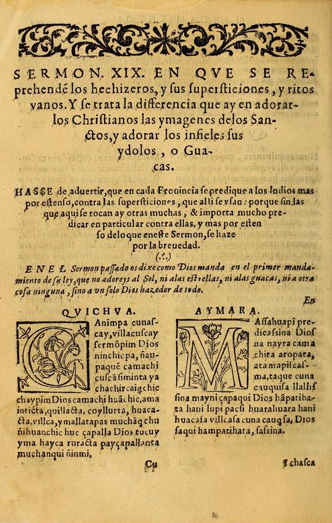